While the rest of the country was feeling the winter chill, NASA Arizona Honda Challenge racers were getting busy with their second event of the 2014 season at Chuckwalla Valley Raceway.  This event was a crossover / points event for the NASA Southern California region which brought out some new faces for the Arizona Honda Challenge regulars to contend with.

Saturday
One of the California racers to make the trek out to Chuckwalla was Andy Hope.  An accomplished road racer and no stranger to hustling his “Circuit Monsters” Honda CRX around a race track, he was quick to lay down some smoldering lap times in the first few laps of qualifying.  Was it a coincidence with his off-road racing schedule or maybe it was all the buzz surrounding Hope and his CRX (which received quite a bit of social and print media coverage last year), that brought Tony Lisa and his Civic EG coupe out of the wood work to stake his claim for the top spot on the podium?  Lisa’s last outing at Chuckwalla in last season’s finale was an awesome display of his car’s potential to run away from the field and not look back.  The table was set for a battle royale between Hope and Lisa.  Unfortunately Lisa’s car suffered a catastrophic mechanical failure early in the day on Saturday and Hope would go on to take the pole position with a smokin’ time of 2:02.8.  The fastest lap time of any Honda Challenge car for the weekend.  Robert Rose, in the Team KIT Integra would start by his side and Mervin Tan in the Team LBR Civic would round out the top 3 for qualifying.

With eight Honda Challenge cars lined up on the grid, all of them eager to establish position within the first few corners after the green flag, it was clear that this race was going to be nothing short of epic.

Hope jumped out to an early lead and looked like he may run away with an easy win, but a minor off track excursion for Hope left the door open for Tan to roar to the front of the pack.  Hope gave chase and for the next 11 laps and the two played cat and mouse trading the lead 4 times.  Rose stayed firmly in third and looked like he might make a run on Tan or Hope, or even both on some laps where he would get unabated runs out of some of the corners on them.  With one lap to go, Hope’s CRX made a surgical pass on Tan’s Civic in the last corner that feeds the front straight away which allowed Hope to claim first place when the checked flag dropped one lap later.  Mervin Tan followed closely in 2nd place, with Team KIT’s Robert Rose finishing in 3rd place.  In addition to the podium finishers, this race was also of special significance to Taylor Wilson of Team Snail whose Civic hatchback was fresh out of the paint booth sporting signature royal purple livery, and Steven Williams’ Integra (also newly painted) who showed great potential finishing their first rookie race without incident.  With some additional vehicle development, both of these drivers should be jockeying for position up front by summer time!

Sunday
Sunday’s qualifying session was packed with new faces as many of the drivers competing in this year’s Honda Challenge series have teamed up with other drivers to leverage their time, money, and strategy. 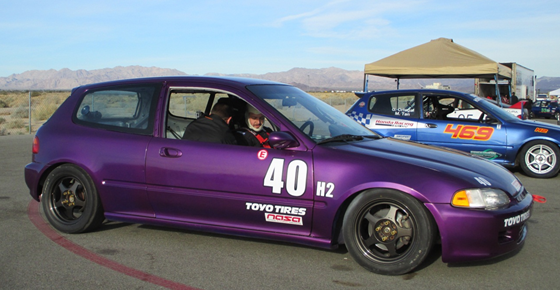 Leland Forbes edged out Eric Dayton in qualifying for P1 going into the Sunday race.  Team KIT’s Kevin Gay qualified 3rd.  Another full field for Sunday’s race meant the opening lap or two would prove for some fierce passing and defending.

Great action shot of the Honda Challenge pack getting funneled into the first turn of the first lap.
Thank you Project130 for the amazing shot(s)!!

Eric Dayton would quickly make his way past Leland Forbes in the opening lap and the two of them went back and forth….that is until Andy Hope, who started in dead last due him not qualifying in an effort to save the wear and tear on his ailing transmission, roared up to the front to get a piece of the action.  Hope and Dayton would eventually distance themselves from the pack and trade the lead 4 separate times in 14 laps. 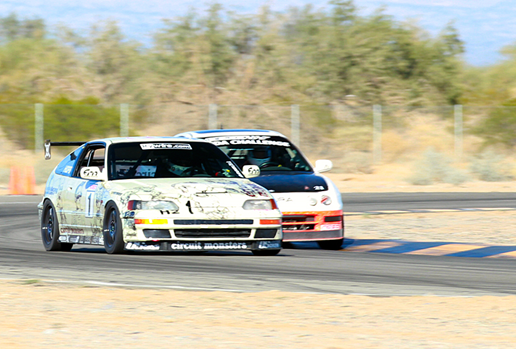 Team KIT made a pass late in the race (we’re talking last lap late!) to edge out Forbes for the last spot on the podium.  Team LBR finished off the top 5, but not before former Arizona resident, now California resident, Doug Evans and his Integra Type-R made a hard charge in the last 3 laps of the race to finish just a few seconds behind Team LBR.  The Arizona regulars haven’t seen the last of Evans though, since he has plans to attend the upcoming events at Spring Mountain Motorsports Ranch and Willow Springs.  Steven Williams shook off the rookie nerves on Sunday and cut 4 seconds off his best time in the previous day’s race. 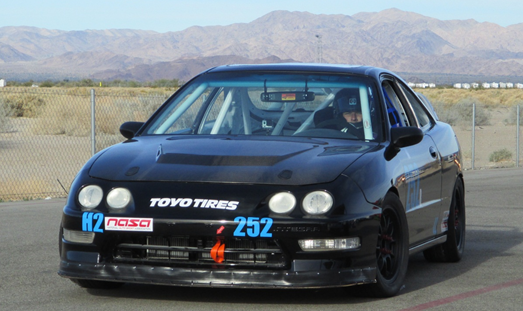 Williams ran his Integra on Toyo RA1 tires all weekend,
with some fresh Toyo RR slicks he’ll be even faster.

For awhile it looked like Williams and Team Snail pilot for the day, Markos Mylonas, would have a good battle, but a mechanical issue from the Snail team’s engine would force an early retirement for their car.  The Team Snail drivers showed what they were capable of last year at Chuckwalla as co-drivers in the 3 hour endurance race in already sorted cars, it’s only a matter of time until they work the bugs out of the Snail car and the rest of the field will have another front running contender on their hands.

The overall sentiment in the paddock after both races was that of a very successful weekend for most of the racers and teams.  Strong turnout (9 cars, 12 different drivers) lots of close/clean racing in class, and tons of position changes for most all of the racers from first through eight place.  Toyo Tires shelled out $800 in Toyo Bucks over the course of the weekend, which was spread out over five different cars.  Honda Performance Development awarded $450 good towards Honda OEM parts to the 1st, 3rd, and 5th place finishers on Saturday.  Thank you Toyo Tires and Honda Performance Development for the generous support!!

Next Event – Wild Horse Pass Raceway (East Track)
The action returns to Wild Horse Pass Raceway, next month.  Beginning with this event all Honda Challenge race cars will are required to run Toyo’s RR (DOT-approved racing slick) tire.  The consensus in the paddock after Chuckwalla was unanimous: the RR retains the predictable handling qualities the older RA1 had at the limit and introduces a whole new level of grip.  Will this tire give the performance needed to dethrone Team FTW’s Integra Type-R as the lap record holder?  Will this be the event that Arizona Honda Challenge sees its first 10+ car field?

The Arizona Honda Challenge 2014 season got kicked off with a bang last weekend at Wild Horse Pass Motorsports Park!!  With a fresh crop of new drivers having recently completed competition school at the conclusion of last season, seasoned drivers and rookies alike were looking to stake their claim on the podium on the East track.

Saturday’s qualifying session was exciting to watch with Team LBR jumping out to early lead in the session with Mervin Tan laying down a blistering time in the mid 1:05’s.  This put Team LBR on the pole for the race later that day.  With the rest of the field within a second of that time, the race was sure to be a close one to watch.

Team LBR jumped out to an early lead and looked like it would cruise to victory, but a full course caution to remove a disabled vehicle brought the safety car out and bunched the field up around the halfway mark.  When the green flag dropped, Team KIT’s black Integra GSR roared to the front and beat the LBR Civic to first corner.  Team KIT never looked back and was able to secure a first place podium finish with hired gun Robert Rose at the helm.  Not bad for the car’s first outing in race group!  The rest of the podium was rounded out with Team LBR in 2nd, followed by the return of Leland Forbes in the “Green Machine” finishing a very respectable 3rd place.

Sunday’s qualifying sessions and race proved to be just as action packed as Saturday’s. With many of the Honda Challenge competitors teaming up with other drivers, it was time for the co-pilots to take the wheel. Leland Forbes edged out Eric Dayton in qualifying for the coveted inside position going into the Sunday race which would feature a standing start. Leland’s Green Machine launched out of the hole like a rocket for the first few corners, going through the carousel it looked like Leland’s car began to spin, but he corrected the slide and went on to lead for the first half of the race as they made their way through race traffic. That is until Eric Dayton’s 2 liter B20 flexed its muscle coming out of turn 10 to slingshot him into first place. It looked like Eric Dayton would cruise to victory, but a pass late in the race by Leland regained the lead position, one that he would hold onto until the checker flag dropped at the 30 minute mark. Sunday’s podium finishers: Leland Forbes in 1st place, Eric Dayton in 2nd place, and Team Ramrod with Ravi Tomerlin working the pedals late in the race to protect 3rd place.

Here’s a video with front and rear footage of the first lap of Sunday’s standing start race. http://youtu.be/es7rU2diZcE

Overall, a great weekend to start out the 2014 season.  Toyo Tires doled out $800 in Toyo Bucks over the course of the weekend, which was spread out over all five cars that took the green both days.  Honda Performance Development awarded $450 good towards Honda OEM parts to the 1st, 3rd, and 5th place finishers on Saturday.

Rookie Racers
Congratulations to our rookie racers for taking the green flag for the first time: Stephen Busler who co-drove the silver Integra for Team Ramrod and Kevin Gay who co-drove the black Integra for Team KIT  We have three more new rookie racers (Steven W., Taylor W., and Markos M.) who barely missed finishing up their cars up for this event.  Get those wrenches turning so you can join the HC circus in February!

Next Event – Chuckwalla
Speaking of February….our next event will be here in just 3 short weeks.  This will be a crossover / points event for NASA SoCal’s Honda Challenge group as well, so expect to see a few new faces on grid.

This will be the last event where the RA1 tires will be allowed and will also be the debut event for the new spec tire, the Toyo RR.  The rumor mill is buzzing that these tires are about a second faster at most tracks, with similar wear characteristics as the RA1.  Track record holders beware….

This will be updated after each event to reflect the overall season points for 2014.